You are here: Home / Inspections / Visit of Kurucay slaughterhouse in Bolu, Turkey

Today one of the EonA/AWF teams in Turkey visited Kurucay slaughterhouse in Bolu, Turkey. Our team is made out of Asalet and Lesley and Dr. Eser, a German veterinarian and expert in “humane” slaughter. Like all other cattle and sheep slaughterhouses in Turkey, the animals have their throats cut without prior stunning. We of course would like to see that Turkey adopt stunning, but in the meantime are also trying hard to reduce suffering in other phases of the slaughter procedure.  The slaughter-man at this plant sharpened the knife in between each cut, and the knife was long. He thus managed to make a proper cut already on the first, or sometimes the second time. In other plants we have been to, the slaughterman had to cut the throat 4-5 times until enough blood is coming out, which obviously causes more pain. Additionally we were very pleased to see that they had installed an anti-mounting rack along the corridor where the cattle pass through into the slaughterhouse. This prevented the bulls from mounting each other and falling and injurying themselves badly. We are going to use their anti-mounting rack as a model for all other cattle slaughterhouses in Turkey to copy asap. 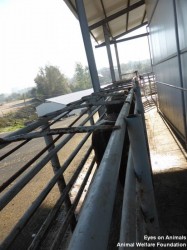 There were aspects in this plant however that badly need improvement and we had a long and very open discussion with the owner, the slaughterman and the veterinarian about them. For example, the animals see the slaughterprocess from the corridor, and thus are very apprehensive to move into the restraint box. This added stress and fear. They also use a trip-floor box and hang the cattle up by the legs, which causes injury and pain. Worse is that the bulls are fully hoisted 1 metre off the ground while still conscious and left sometimes like that for up to 17 seonds before being cut, and then it takes another 40-90 seconds before the animal loses enough blood that s/he becomes unconscious. 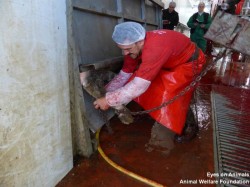 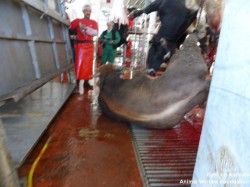 They promised us that they will soon hang curtains to block the view. Dr. Eser also showed them how to perform a chest-stick which makes the animal lose more blood quickly and thus lose consciousness faster. We will remain in touch with them and would like to thank them for being open to our criticisms and willing to learn. We invited them to our seminar this upcoming weekend in Istanbul and hope they will attend to learn more. 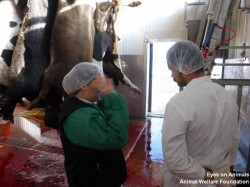 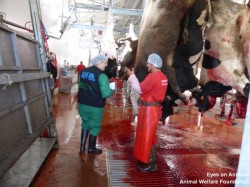 Via spreading knowledge and compassion, we hope to be able to quickly reduce at least some of the suffering to the billions of animals being slaughtered in the world. 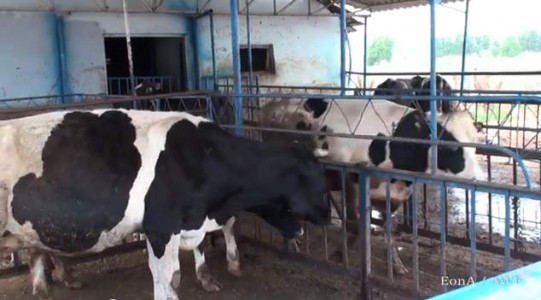 Halal slaughterhouses in Turkey and the need for improvements…

Do you want to help?